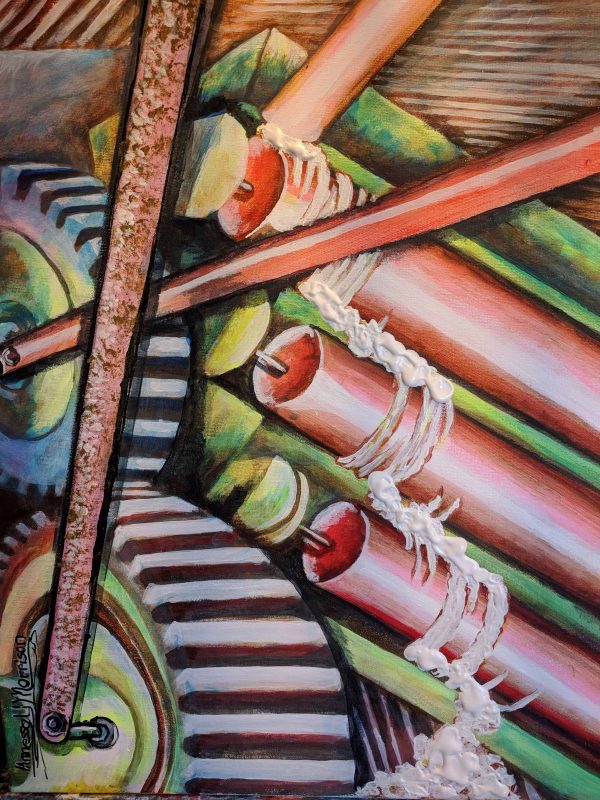 Original canvas print of “The Flow”

Still thinking of what would a good outcome for society and people look like I delved into the process of change that a new way of thinking might take. What would a global thought change process look like?

Dough as it is being kneaded came to mind. With so many structures and processes in place already it was not an act that could be completed by the versatile human hands. Depicting the cold tech of the world forming a new version capable of emerging in a new day as a fresh hot new place that all could rise to the occasion.

The eclectic version of machinery as steam punk was not absolutely right, and the new high tech capacitors and chips did not fit the bill either. Each of the pieces of red tape had a reason once for becoming the societal mechanism for a better world. Forms working together not hard edged or recognizable as a machinery we know could depict in new vibrant colors a clockwork of systems already in place. Making sure that it is not all meant to work together was also very important.

This is not meant to be an assembly line of human who all accept an unequitable and sometimes down right harmful status quo. Harmful to an entire society who will be denied the gifts of whole swaths of special abilities for a pre-interned superiority complex.

There are no reviews yet.

Be the first to review “The Flow” Cancel reply